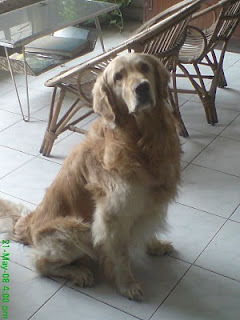 Some things happen and there is no explanation at all.

Our dog, Leo, a Golden Retriever, had come to us in 2004 as a small ball of white fluff. I was resentful of his coming because I was dealing with my daughter’s 12th standard blues. If you do not know of such blues, be a parent and find out. He just seemed like an unwanted and uncalled for responsibility. Not long before I fell in love with him.

Love conquers all, and a dog’s love, well, he was beautiful, soulful, licky-waggy, the works. And jumpy and fun. He was the one who greeted you and was all over you, totally expressive about how much he missed you while you went shopping or dining or movie-ing or travelling without him. He moved up and down the room around you at the time for his walk, came and thumped his tail and wanted ‘out’ with you. When you sobbed in a quiet corner, he put his head in your lap and shed his doggy tears with you, licked your face and said he was yours forever and that should matter.

But he did not remain forever. In our hearts yes, but physically he left us on the 18th of June this year. Such an unexpected death, he had not been eating too well, and the vet, whom we had full faith in, gave some antibiotics, saying it may be stomach infection. We thought it was the heat, he was being fussy, gave him more frequent baths etc. My daughter arrived from Mumbai and noticed his darker stools and urine. She read up on it and told the vet to check for liver problem. Turned out he had jaundice. By now Leo had begun vomiting everyday, whatever he ate. The vet gave him antibiotics and put him on a drip. It was too late, Leo was not taking in anything but these injections. This was just for two days before Leo, our sweet lovable and trusting six year old doggy, left us. He had begun to vomit blood. My daughter and husband sat up the two nights with him, massaging him to sleep. But on the 17th night, my daughter, unable to sleep, and she was there with us in the bedroom for Leo slept in our room, woke both of us and pointed out his heavy breathing. We called the vet and tried to follow his late minute instructions but it was too late. He died of internal haemorrhage caused by the liver failure.
He was loving and full of energy. He was big, blond, beautiful. He was regal and sphinx like. He had the eyes of an Egyptian dancer, kohl rimmed. He was gentle and soft and all the kids of the colony loved him, he was one dog they were not scared of.

Leo, we love you. We miss your running circles around us and your gentle licks of love. May you rest in peace.

Lesson: For all of us with loved ones, please keep a watch on anything that is abnormal, not eating well is one of the first signs of sickness.
Posted by Abha Iyengar at 1:46 AM