Indiblogger Meet …an Encounter worth the time!

I decided to attend the Indibloggers meet at the Park Hotel  on Sunday, the 11th December, for several reasons. One was to connect with some of the bloggers whom I knew  online and second to connect with some I did not know at all. It was also the convenience of both the time  (afternoon) and venue  (Connaught Place) for me.
I can say that I was rather apprehensive about the meet, since I had not attended any before, and also because I could get lost and lonely in the milieu. So it was more of an impulsive whim and a desire to meet fellow bloggers that propelled me there. The Park is a familiar venue for me, so that offered a level of comfort.
The welcome was warm. Introductions were in full swing among the women at least and I soon joined in, introduced myself, and found that there were all kinds of bloggers. I blog on ‘encounters’, and this covers a gamut of situations. Two popular bloggers whose blog names were being thrown around were Cyber Nag and Indian Home Maker. Cyber Nag was gentle and friendly and Indian Home Maker was smart and camera-wielding. So the titles did not ‘really’ fit in real life, but must be doing so in their blog avatars. I have yet to find out, for I have many blogs to visit now. I met a quiet Anshuman who blogs about ‘random resistance’ , Sangeeta Khanna who has 4 blogposts on desi food, Santosh Bangar who blogs on simple healthy cooking, Purba Ray, Pallavi, Rachit, Vineet, and a host of others. Someone intorduced himself as “not from Jalandar” (to refute his introduction on- screen as being from Jalandar). I met Dr. Maurice Ryder who writes on Himalayan adventure and action, on animals and on…many things. Ritu Lalit and Aabha Midha I met in person for the first time, and it was great to do this eventually. Hiren Gogoi, a young student from Amity, obliged by clicking several of our photos from the several cameras handed to him!
There was a blogger who blogged on liver transplants, and another who did the same on finance.  Jaspal said he made lakhs from his blogging, I think we all need to know the secret of his success. There were blogs on the mundane and the unusual, but blogs galore, take your pick!
HPoriginals emphasized the value of the original over the copy. We talked on plagiarism, and I spoke of how some of my poems had been pasted once without attribution to me. A young lady, who spoke about her blog on liver transpant being completely copied by someone, won an HP Printer.
The introductions over, the games began. Team work, treasure hunt. So the team with the most number of ‘original’ (guess what) finds, won! And individuals who found an ‘original’ also won…a printer!
High tea. Chole-bhaturey and pakoras and other mouth-watering goodies. 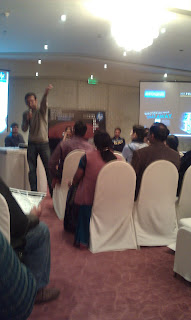 The Discussion is On !
Another game of writing comments on flat boards carried by the participants on their back (I got a couple of really sweet commentsJ), and some lucky ones won again. The last event was where a mock panel of Kapil Sibal, Mark Z., Sonia Gandhi, Digvijay Singh, Suhel Seth, a Yahoo and Google rep. etc., faced the audience. With  the bloggers’ own version of Rajdeep S. manning the show, we had a humourous and enlightening time. Someone in the audience said that Sonia Gandhi should not be mocked, and he was asked whether Veena Malik should? Touche. Thank god for freedom of speech, that is all I can say. Each one of us can speak and be heard.
Well, the cars and autos and buses were waiting. We took our T shirts (yes, that too!) and bid our goodbyes to new friends made and old friendships strengthened.
Thank you Indiblogger and HPoriginals for a really good time. Oh yes, I learnt how to use the QR App. too!That is an added attribute.
**********************************************************************************
Posted by Abha Iyengar at 11:42 AM