Name: Kazim Rasool
Age: 60 years
Education: 10thgrade . Regrets not having studied further, for he would have had to go to Aligarh for that.
Resident of Budaoin, Uttar Pradesh. 250 kms from Delhi.
Addiction: Reading the newspaper every morning.
Quotes: “Love of newspapers is an addiction like any other. But it is harmless one and increases knowledge and awareness.”
“There is no good or bad job. It is the man on the job who is good or bad.”
“I work because I want to have my limbs active and alert. There is no need for me to drive the auto.”
“I don’t cheat anyone. For example, I don’t take people who are new to the city on a round- about ride. God is watching.”


Feeling after interaction with him: Peaceful. Good to meet people like him. 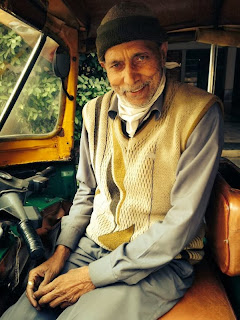 Posted by Abha Iyengar at 12:33 AM No comments:

The Ring of Love

On a cold winter morning, I experienced my ‘Platinum Day of Love.’ It was the day my husband, Vinod, arrived to be at my side as I struggled to live.

I was not on India, but in Berlin, where I had gone for a conference. I was suddenly taken so ill that I had to be hospitalized. I had been suffering from a cold and had been taking Crocin for fever on my flight. Delhi had been cold and Berlin was much colder. The conference over, I collapsed at the University where it was taking place.

It was December and Christmas time, but I was in a hospital in a strange country, away from my loved ones. I was surrounded by doctors and nurses. I had a severe case of Hepatitis A which had gone undiagnosed till now. I had to take pills. I received so many injections that the inside of my arm look like a red anthill. I was transported on a wheelchair to several rooms for some test or the other for I was too weak to stand. The doctors were cheerful, but I missed the love and warmth of home and country. I was feeling sad and morose, wondering whether I would ever go home.

At the time this happened, my husband had just returned from a trip abroad for work and had already spent the foreign exchange allowed (there were restrictions then) by the government. He had none and no one had any to give him. Eventually he managed to borrow a few dollars from my brother-in-law. He had to arrange a visa immediately for himself since the doctors in Berlin had asked him to come at once, “to see his wife’s face for the last time.” He frantically got in touch with the Indian embassy. I do not know what he did but he did manage to arrive by my side after a few days.

My brother-in-law’s friend, a stranger till now, met him at the airport and offered his home as a place to stay. Somehow, Vinod had managed against all odds to be with me, perhaps knowing that I had to see him in order to make my way back to recovery.

He tells me that when he walked into the room to see me, he did not know whether I would survive, I was so pale and thin and weak.  I tell him that when I saw him walk in, I knew that I would survive. The doctors told me that I was a spunky and tough woman, but it was after my husband arrived that they noticed that I really began to recover. My liver, which had shrunk to an abnormal size, began to regenerate itself. I know for a fact that all organs of the body are connected. My heart had informed my liver, I think, that it was time to embrace life again and not give up so easily. My husband was here to make sure I did that.

Though it was a woman’s section of the hospital, they allowed him to come and visit me every day. They also allowed him to stay as long as he wished. This was a rule that was bent for my sake; these hospitals have strict visiting hours. The doctors marvelled at the fact that my husband would come and spend so much time with me. They had never seen this kind of love and attention being showered on a patient.

I thank the Berlin doctors for giving me back my life. I also know that it is Vinod’s love for me, pure, eternal and rare to find, that gave me the strength to survive. All these years, despite all the ups and downs that life has offered, he has never given up on me, and has never left my side. I am encircled by his love.

The day he came to the Berlin hospital is our Platinum Day of Love. And all our days together will always be platinum days, pure, rare and eternal.  Just like platinum, glowing and strong.

This real life story has been written in response to PlatinumDay of Love at Indiblogger.
Posted by Abha Iyengar at 1:05 AM 11 comments:

The one traditional method of beautifying and exfoliating that has been used by my grandmother, mother and then by me on my children is what is called ubtan. It is a simple combination of gram flour and mustard oil, mixed together to make a thick paste.

This is how I used to apply it. I would spread a thick bedsheet or a Turkish towel on the verandah. Then I place my son on the sheet and undress him. The exposure of the naked body to the early morning sun enables the skin to make the much required vitamin D for strong and healthy bones. He would kick his arms and legs in delight.

Then I would rub the ubtan gently on my son’s skin, over his arms and legs, stomach and back. When it dried a little, say after five minutes, I would gently rub it off. The ubtan would roll off in little beads, slightly discoloured with the dirt it removed from the skin.
I would take special care to rub a bit more over the arms and legs. This is because the hair on the arms and legs of the child is light and comes of easily. Regular use of ubtan ensures a relatively hairless skin. Girls do not require that frequent a waxing and other beauty treatments once they grow up, if their mothers have used ubtan on them when they were kids.

Ubtan is a beauty treatment in itself, and can be applied by adults to their bodies before having a Sunday bath. It cleans the skin better than any soap or body scrub, and leaves it soft and silky. It uses two things that are found in any kitchen: gram flour and oil (mustard oil can be substituted with any other oil like til oil or coconut oil). It is a cheap and healthy way to get a beautiful skin.
Instead of oil, we can also use the cream of milk or milk.

Do note that the ubtan mixture should be a bit thick if you want to rub it off the skin after it dries a bit, so as to remove the dirt and fine hair. A thinner mixture can also be made, applied on the skin and then washed off, if just softness of skin is required.

Today, as we reach for over-the-counter beauty treatments, we seem to forget the simple, chemical-free home remedies that were used by us traditionally. The time has come to revisit these remedies. It is a known fact that babies when rubbed with ubtan, or even just oil in the sunny courtyards and balconies, and then bathed, have strong bones, healthy bodies, and good skin.
Dabur’s Lal Tail is one of the oils that can be rubbed on the child’s body to help him grow strong and healthy. Dabur is a brand known for decades for its Ayurvedic traditional products that heal and provide health.

The value of any oil on the body is well-known Coconut-oiled hair grows thick and black, that is why Bengalis and Keralites have beautiful, thick black hair even when they grown old. Coconut oil on any burn mark on skin, when applied daily, reduces the intensity of the mark. Mustard oil rubbed on teeth with salt, creates strong gums. There is no end to the use of oils in our traditional applications to make our bodies strong and healthy. There is knowledge here that needs to be respected and used.

All I can say is that I have found ubtan to be one of the best ways of ensuring that my children have strong bones and healthy skin. Also, the kind of bonding that takes place between the child and the mother during this process of applying ubtan, can only be experienced.

This post has been written as an entry for Dabur Lal Tail contest.

There are Free course here on design and storytelling

https://iversity.org/courses/the-future-of-storytelling?r=d5cad
Posted by Abha Iyengar at 2:41 AM No comments: