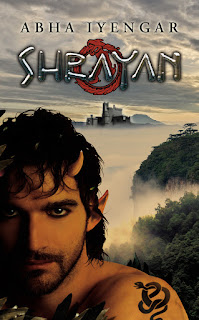 SHRAYAN, my fantasy novel
is now available at Infibeam.
You can BUY it here


A quest for acceptance…in a world where he does not belong.

In a world obssesed with beauty and perfection, Shrayan finds himself rejected as a beast, an ajooba. Driven from the underworld to the forest and then to the city, he looks for acceptance, love and a place to call home. He trains to become a dancer, and meets the beautiful Mukundam at Kshatriyam, the dance school. Mukundam’s statement that beauty is a curse is beyond his comprehension till he finds that he has become beautiful overnight, and is challenged to pay its price. In the journey he takes to find himself he battles with a teacher’s power, a hunchback’s hatred, a warlord’s bondage and most of all, his own primal urges. Forced to make some tough choices, he finally turns towards dance for solace. And then he uses it as a weapon. It is the one thing that remains integral to him as he prepares to meet his fate.

About the author ABHA IYENGAR :

Abha Iyengar is an internationally published poet, fiction writer and creative writing facilitator. Her work has appeared in Pure Slush, Bewildering Stories, The Asian Writer, New Asian Writing, Urban Shots, Muse India and others. She is a Kota Press Poetry Anthology Contest winner (2002). Her story The High Stool was nominated for the Story South Million Writers Award (2007). She writes articles on health, spirituality and travel. She also writes poetry in Hindi. Her poem-film titled Parwaaz won a Special Jury prize in Patras, Greece (2008). She won the Lavanya Sankaran Writing Fellowship (2009-2010). She was Featured Poet at Prakriti Festival (2010). Her book of poems, Yearnings, appeared in 2010 (Serene Woods).
Available for purchase at  Infibeam here

Posted by Abha Iyengar at 10:42 PM No comments: